His Eminence Sayyed Salih al-Hakim, Director of Kalima Center for Dialogue and Cooperation, met the Italian Ambassador Bruno Antonio Pasquino and the Spanish Ambassador Juan Jose Iscobar in two separate meetings. The two ambassadors expressed their interest in the role of center in the field of dialogue and the promoting the culture of dialogue and peaceful coexistence.
“The Italian ambassador to organize a program of meetings with officials of the Italian government, intellectuals and members of parliament, as well as the visit of the Pope of the Vatican, it is hoped that this will be next month” Sayyed Salih Al-Hakeem said. Al-Hakim added that the Italian ambassador is keen to conduct these meetings in Rome, in order to see that the religious authority and Hawza in Najaf have a great rationality and broad interest. Therefore, these noble ideas must be delivered.
On the meeting with the Spanish Ambassador “The Ambassador focused on the respect of Spain for the religious authority and thanked us for our presence in Madrid conference on 15 February, and the ideas that were presented and stressed the importance of communication with Spain and asked us to organize meetings with Spanish officials and thinkers when we visit Europe” the Director of the Center said. 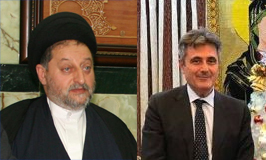