His Eminence Grand Ayatollah Al-Sayyed Mohammed Saeed Al-Hakeem in direct connection with Ayatollah Shaikh Qasim ” we are in deep concern for you and the believers “.
On Friday 24 June 2016 his Eminence religious Margie Ayatollah Al-Sayyed Mohammed Saeed  Al-Hakeem made a call from Holy Najaf with Ayatollah Shaikh Qasim, he expressed his great solidarity with him and expressed his deep concern for Ayatollah Shaikh Qasim and Bahrain people by recent serious fallout and blatant infringement by the regime over his Eminence.
Al-Margie Al-Hakeem prayed Almighty Allah to stop this violation over Ayatollah Shaikh Qasim in the best manner and remove the scourge from him and his believed people .
In turn ,Ayatollah Qasim thanked this knwon fatherhood of great Margies ,his Eminence Margie expressed that he asks Allah to remove the scourge away from Islamic nation everywhere without discrimination between its sons ,sects and groups ,and “Allah bears witness to our love for all Muslims and we ask Allah salvation for them in whole the earth”
His Eminence Al-Margie Al-Hakeem has presented his thanks to Ayatollah Shaikh Qasim for helping people in their matters and keeping a calm situations refering to the role of Ayatollah Qasim in peacekeeping and the security of Homeland.
His Eminence Al-Margie confirmed that he tracks and inspects the implications of this infringement and  he doesn’t stopped pray to rapid salvation.
At the end of the call ,Ayatollah Qasim thanked this fatherhood and kindness of great Margies and praying for Al-Margie Al-Hakeem in long life and success to serve the Islam and Muslims.
Also the son of Al-Margie Al-Hakeem has reported to United Nations the concern of religious Margiyyah about actions of Bahrain Government and its interventions in religious affairs of  Shiite Ahlul Bait ,these interventions are incompatible with the principals of human rights. 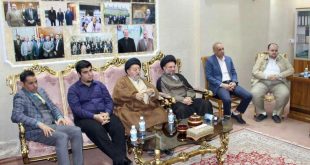 Participation in a seminar at Alrafedein Center 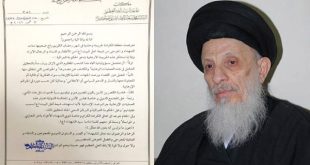