His Eminence Hajjah Al-Islam and Muslims Sayyed Riyadh Al-Hakim met Sayyid Hassan Al-Khorasan, Secretary-General of the Shiite shrines , and his accompanying delegation in the office of His Eminence, the Grand Ayatollah Sayyid Mohammed Saeed Al-Hakim in Najaf
His Eminence, Sayyed Riyad Al-Hakim, stressed that the cultural, social and service activities emanating from the holy shrines give a great dimension to the general Shiite culture in its interest in society.
His Eminence added that the state of reconstruction and expansion witnessed by the holy shrines should be complemented by artistic and engineering touches that are appropriate to each of the holy shrines and the environment that embraces it.
His Eminence also called for the need to develop translations of all shrines that serve as a guidebook and suggested that the establishment of centers and programs that stem from the holy shrines should contribute to the enhancement of the cultural and social aspects such as building clinics, schools or centers of social solidarity and providing assistance to the needy people 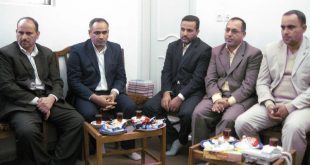 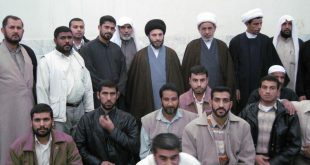 His Eminence Sayyed Riyad al-Hakim receives a delegation from the Nur al-Murtada School of Religious knowledge in Basra. 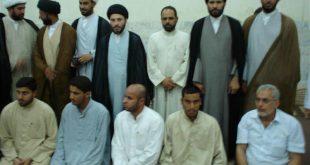